Showing posts from August, 2012
Show all

By Awais Aftab August 28, 2012
An edited version of the following article has been selected for and is competing in JPMS International Medical Writing Contest 2012. You are welcome to visit it on the JPMS site, and read, share and comment, because that will contribute in part to the final result.
Evidence-Based Medicine and Psychiatry

Evidence-Based Medicine (EBM) is rapidly becoming the mantra of modern clinical practice. It is being taught in medical schools and discussed in conferences as the ‘gold standard’ of health care decisions. The paradigm is making its impact on psychiatry as well, and one can see practitioners and journals attempting to reframe their approaches in the light of EBM. While this methodology is well-argued in medicine and is showing great success, its application to psychiatry is on shakier grounds. I will argue that this is because of two factors: Firstly, the general and recognized limitations of EBM are more acutely felt when applied to psychiatry. Secondly, there are inher…
Post a Comment
Read more

By Awais Aftab August 27, 2012
#TS257 prompts: galactic, yak, tabernacle.
"I'll stay in ur arms in this tent for light years..." he yakked on, unaware that the galactic faux pas was the bane of his seduction #TS257
#TS258 prompts: curiosity, qawwali, bedlam.
"What does qawali sound like?" "An immersion into something ancient." "Would it cure the bedlam in my mind?" "It's music, not magic." #TS258
#TS259 prompts: horde, gourd, overlord.
As per tradition, the horde sought the dead overlord to carve out his manhood for the sacred gourd & discovered that he was a woman #TS259
#TS260 prompts: inchoate, concertina, never-never land.
Their inchoate relationship began with hopes of eternal youth & romance, but everything decays and love can fold up like a concertina #TS260
#TS261 prompts: crush, wine, blasphemy.
Dressed up as Jesus on Halloween he finally hit on her 'Can I get u a drink?' 'Only if u are better in bed than u are at blaspheming' #T…
Post a Comment
Read more

By Awais Aftab August 16, 2012
The following is an excerpt from a lecture Ernest Gellner gave in 1995 in Heidelberg at a conference in which he tried to explain some unexpected developments of the 20th century. The except below deals with the continued strength of Islam in a world where hold of religion over society appears to be declining in general.
"Tonight I will try to explain a few of the major striking events of our century – some very surprising, some a little less surprising. Very surprising is the tremendous success of Islam in maintaining and strengthening itself. Most social scientists accepted the secularization thesis, which argued that in modern or industrial societies the hold of religion over society and over the hearts and minds of men declines. This seems more or less true with one striking exception: the world of Islam, where the hold of religion over society and over men in the past hundred years has certainly not diminished and seems to have increased....
Why is lslam so astonishingly su…
4 comments
Read more

By Awais Aftab August 10, 2012
The Dark Analyst confronts Derrida...
Bruce: I knew the postmodernists wouldn't go down without a fight, but this is different. They crossed the line.
Alfred: You crossed the line first, sir. You squeezed them, you hammered them to the point of desperation. And in their desperation, they turned to a man they didn't fully understand.  Bruce: Philosophers aren't complicated, Alfred. Just have to figure out what he's after.  Alfred: With respect Master Wayne, perhaps this is a man that you don't fully understand, either. Some men aren't looking for anything logical. They can't be bought, bullied, reasoned, or negotiated with. Some men just want to watch the world burn. 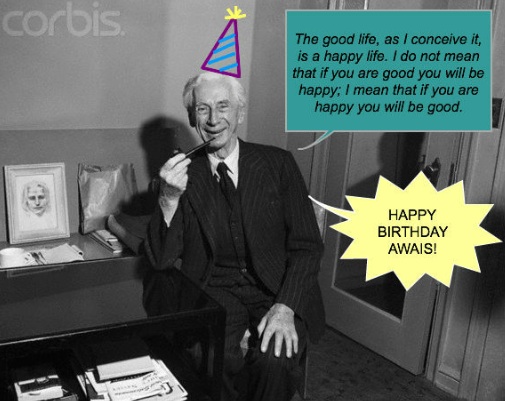 A delightful birthday greeting sent to me by my dear friend Sadia Khatri!

By Awais Aftab August 08, 2012
I used to have a tradition on this blog of posting a poem by Sara Teasdale on the 8th of August, a date of birth that I share with the said poet. This year it is time to revive that habit:
Central Park at Dusk
by Sara Teasdale

Buildings above the leafless trees
Loom high as castles in a dream,
While one by one the lamps come out
To thread the twilight with a gleam.

There is no sign of leaf or bud,
A hush is over everything --
Silent as women wait for love,
The world is waiting for the spring.

A Precise Definition of Nothingness

By Awais Aftab August 04, 2012
An excerpt from Has the Meaning of Nothing Changed? at Slate:
'It takes Holt 150 pages or so of travelling the world interrogating the nothing theorists to find one who gives what he believes to be an adequate definition of nothing—the nothing we seek to find, the one that qualifies for the “how do we get something from nothing” question.
This comes in his conversation with the physicist and cosmologist Alex Vilenkin, and it’s worth listening to what a stringent definition of nothing really is:
“Imagine,” Holt asks us, paraphrasing Vilenkin, “spacetime [the matrix we live in] has the surface of a sphere. ... Now suppose that this sphere is shrinking like a balloon that is losing its air. The radius grows smaller and smaller. Eventually—try to imagine this—the radius goes all the way to zero.”
Pause for a moment to think of a sphere whose radius has gone “all the way to zero.” No time. No space. It’s hard—but not impossible—to get your head around it. Now back to Holt:
“The surfac…
Post a Comment
Read more

Why is there nothing rather than something?

By Awais Aftab August 04, 2012
X: Even if there was only nothing, the philosophers would still ask 'Why is there nothing rather than something?'!

Pak-India Social Media Mela covered by me for Us magazine of The News:


(To view in original size, right click and select 'open link in new tab')
The cover story is available on the Us magazine website, and the epaper of The News (3 August 2012).
The story also had a section of 'Twitter Timeline' originally, containing a small selection of tweets from the #socmm12 hashtag, which could not be published in print due to lack of space, and which I am now posting on the blog:
Twitter Timeline
Sabeen Mahmud ‏@sabeen @SenRehmanMalik Thank you from the PeaceNiche team for all your support. Your accessibility and graciousness made #socmm12 possible :)
Komal Ali ‏@Komalali92 #ThankyouRehmanMalik for supporting the #socmm12. Without your help, our Indian fellows wouldn't have been here.
Shiraz Hassan ‏@ShirazHassan Some technical issues :( hope we'll able to connect with @dillidurast and Barkha Dutt via skype #socmm12
Salman Latif ‏@SalmanLateef Vankat talks stages of unempl…
Post a Comment
Read more

By Awais Aftab August 01, 2012
"As a young man, I often goaded my believing friends with crudely logical questions about God. But as the years have passed, I have found myself hankering more and more for a little cosy voodoo in my life. Increasingly, I regard my atheism as a regrettable limitation. It seems to me that my lack of faith is not, as I once thought, a triumph of the rational mind, but rather, a failure of the imagination - an inability to tolerate mystery: a species, in fact, of neurosis. There is no chance of my being converted, of course - it is far too late for that. But I wish it wasn’t."
Zoë Heller, Everything You Know