Showing posts from October, 2008
Show all

By Awais Aftab October 29, 2008
For believe me!—the secret to harvesting the greatest abundance and the greatest enjoyment from existence is this—living dangerously! Build your cities on the slopes of Vesuvius! Send your ships into uncharted seas!... The time will soon be past when you could be content to live hidden in the forests like timid deer. - Friedrich Nietzsche

Most people prefer to live deterministic lives; lives that can be mapped out, charted with accuracy, the trajectory plotted out in coordinates with precision: they live in a Newtonian world. Newtonian physics, as we all know, works for a large number of everyday observations, but when you go to the extremes, when you push limits, that's when it breaks down. There are people who live at these extremes, where determinacy loses its meaning, and uncertainty rules. Where there is not a single path to follow, but a maze of probability to walk through. Where identity hangs from the question mark of wave-particle duality. This is the Quantum world. Newton…
3 comments
Read more 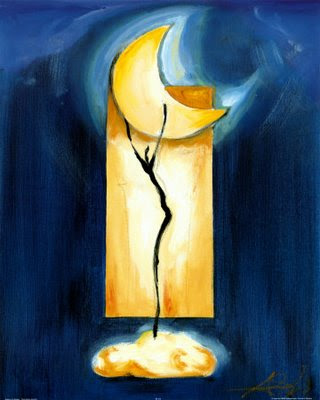 Alfred Gockel is a brilliant German abstract artist, whom i have recently come across on internet, and his paintings have captured my fascination. They are not only beautiful and inspiring, but they reach out to something deeper in me. His vibrant and swirling colours, his abstract figures, his romantic scenarios, the intense flowing lines, the elegance of his work, its all magic. And i feel bound to share the work of this maestro on my blog. Here is a selection from his paintings:

Moved by the Music I

The Pursuit of Meaning

By Awais Aftab October 23, 2008
X: All of your rebellions and heresies and deviations and obsessions can be traced back to a single thing: the pursuit of meaning. It seems as if 'meaning' is some sort of a sensation to you; like an addict seeks 'being high' and tries all sorts of drugs for it, you seek the sensation of your life being 'meaningful', whatever that means, and you are willing to try breaking all sorts of social and moral rules for that. Why you can't find the things which other people find meaningful is something that shall perhaps remain an enigma to me.
Post a Comment
Read more

I had to take this Tag from Misspecs!
1. The age you will be on your next birthday
The grip of life keeps getting tighter!

2. A place you would like to travel to…
Louvre in Paris. Ah, Mona Lisa awaits me!3. Your favorite place4. Your favorite pet
The only pet i ever had when i was a kid; it 'drowned' in a glass of water in an accident. :(

7. First name of your significant other


8. The town in which you live

I live in this part of lahore.
9. Your first job

Yeah, you sure can. That's what i did for my first pay-check.
10. Your dream job


The psychologist Sean Maguire from Good Will Hunting, played by Robin Williams. Ah, i want to be that guy!

Being Sisyphus; Camus was wrong. Sisyphus is not happy!
7 comments
Read more

Indian writers of English fiction began to grow huge internationally in the '80s and the '90s, but Pakistani writers have begun to do the same only in the last decade. While there have been many brilliant novels with international recognition, let us examine these four which are probably the best of the lot.

Moth Smoke by Mohsin Hamid (2000)
"The alienation is so thick you can cut it with a knife," writes Peter Gorden, describing the atmosphere of Mohsin Hamid’s debut novel, Moth Smoke. With the richness of historical symbolism, the novel describes the decline of Darashikoh, a person on the fringes of upper-class elite in a Pakistan suffering from economic crises after the 1998 nuclear explosions. Daru’s deterioration is best described by Hamid’s own metaphor: a moth spiraling around the candle, seduced by its flame, revolving, falling, until it makes contact with the fire… the moment of union, and… the moth has been re…
3 comments
Read more

Music heals. It helps you deal with the pain. Like a gentle touch on a sore skin, it makes the ache more bearable. It doesn't abolish the pain but it makes us less affected by it. A song that fills you up, makes you resonate with its tune, this is the music you need in your life. Something that makes sense of what you are going through; makes you feel that you are not the only one. That this song is the acoustic transmission of the shared feelings of all the people who have been through the same. Some words of lyrics that never made sense to you, but at some right time you find yourself humming the song and realize the meaning that was always inherent in them. Good music is not the songs that make it to the charts, most of whom you won't even remember with time. Good music is what reaches to you, which touches you. It need not even have words; it could be an instrumental; feelings too sometimes have no words. Like people, songs too come in all varities. You have to find the so…
2 comments
Read more

By Awais Aftab October 10, 2008
Whether you are a man of art, a man of science or both, you will find these pictures very fascinating: art and science meet at the microscopic level.
2 comments
Read more

By Awais Aftab October 08, 2008
Why do i hate wedding ceremonies so much? (Pakistani wedding ceremonies, specifically.)
Because they are a nauseating display of the hypocrisies and superficialities of our society; because they are a finerly orchestrated drama of money and social politics; because they are a means to show-off how much wealth one has; because the ceremony is more about the family and relatives of the couple than about the bride and the groom; because everyone pretends to be happy; because people are more concerned about making the video of the function than about the wedding itself; because the aunties are always on a rishta-hunt; because people compete for food more ferociously than even predicted by Darwinian selective forces; because it is a flagrant waste of money and resources on an event which is supposed to be simple and beautiful but has been mutated into a hideous social monster.
And because the bride almost always looks ugly!! God, why do they even need to plaster their faces with such thick l…
13 comments
Read more

By Awais Aftab October 03, 2008
This Eid i pretended something for a while... pretended to be normal just like everyone else: A normal person with normal tastes, with normal ideas, with normal conversations, with normal regard for social conventions... and i felt accepted, happy; for a time i was able to overcome my detest and irritation for the things around me, and i felt happy. Artificial Happiness. It made me wonder about my whole previous 'real' life, and my Real Misery.
Sorry, if you are looking for any wise conclusions, you wouldn't find any this time. I don't know what all this means.
Its surprising though, how people around you can live around you for so long and yet have no idea what is actually going on in your head.
8 comments
Read more
More posts