Susanna as Naked and Nude 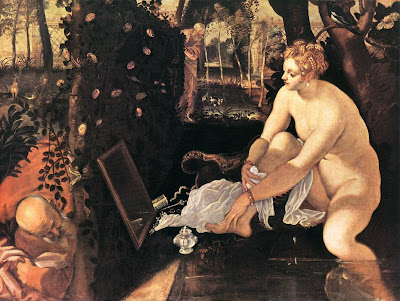 Susanna and the Elders by Jacopo Tintoretto 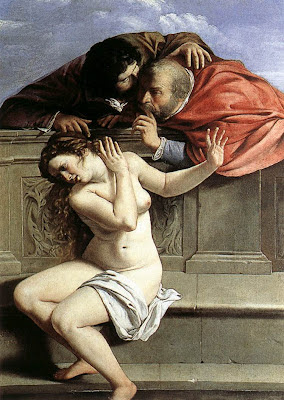 Susanna and the Elders by Artemisia Gentileschi.

Some excerpts are below:

* "One of the most popular themes was a story from the apocryphal Book of Susanna, Chapter 1, about Susanna and the Elders (1:1-1:64). Susanna was the beautiful wife of the prosperous Jew, Joacim. As Joacim was wealthy and honorable, many Jews came to him for counsel and two Elders who were elected as judges that year frequented Joacim’s house often. They began to lust after Susanna and conspired to seduce her together. Hiding in the garden where she bathed, they sprang on the unsuspecting Susanna and threatened to accuse her of committing adultery with another man if she did not submit to their advances. The virtuous Susanna  chose to die rather than dishonor her husband. Fortunately, she was saved by the prophet Daniel who uncovered the truth by interrogating the Elders separately. Susanna was proven innocent of adultery and the Elders were stoned to death for their crimes."

* "The two paintings, despite having the same subject matter and being painted a mere fifty years apart, portray Susanna and the Elders in vastly different ways. While Artemisia’s version clearly shows Susanna’s fear and repulsion as a woman under the threat of rape, Tintoretto’s version of Susanna seems designed to display her feminine charms to the viewer. A viewer would feel inclined to empathize with Artemisia’s Susanna and her plight as a victim of sexual harassment. However, a viewer would be more inclined to view Tintoretto’s Susanna with an appreciation for the beauty of her feminine form while remaining emotionally detached from her plight. In this essay, I shall compare the two paintings and show how Tintoretto’s version objectifies Susanna for  the viewing pleasure of a male audience, while Artemisia’s feminist version is able to show the unfortunate plight of Susanna and move the viewer."

* "Now, according to Berger “to be naked is to be oneself. To be nude is to be seen naked by others and yet not recognized for oneself”. This differentiation of the naked and nude is derived from Berger’s interpretation of Kenneth Clark’s statement “that to be naked is to be without clothes, whereas the nude is a form of art”. Nakedness is essentially a state of undress whereas nudity involves the gaze, a “way of seeing”. A naked woman becomes a nude when she is the subject of a gaze. She is objectified in the process.

In Tintoretto’s painting, the naked Susanna on her own is free to do as she likes and express herself however she wants to, but in the eyes of the Elders and viewer, she ceases to have any personal identity and is merely an object to be ogled at. Her nude body plainly acts as a magnet to attract the attention of the viewer. It has no other consequential purpose or worth. Her porcelain skin and immaculately done hair only serve to emphasize her perfection and show her objectification.

In the case of Artemisia’s Susanna, Susanna may be naked but she is not a nude. Susanna’s hair is disheveled and messy and her washcloth is draped across her thigh as if it was dropped in a hurry. Her appearance is that of a woman who was surprised in the middle of her actions instead of a mannequin posing in an aesthetically beautiful way like Tintoretto’s Susanna. The awkward twisting of her body away from the Elders and the positioning of her arms to fend off the Elders make it obvious that instead of appearing like an object, she is in the midst of a situation which she is actively seeking to avoid."

F. said…
"In 2008 a group of Norwegian researchers ran an experiment to better understand how police investigators come to a judgment about the credibility of rape claims. Sixty-nine investigators were played video-recorded versions of a rape victim's statement, with the role of victim played by an actress. The wording of the statement in each version was exactly the same, but the actress delivered it with varying degrees of emotion. The investigators, who prided themselves on their objectivity, turned out to be heavily influenced in their judgments by assumptions about the victim's demeanour: she was judged most credible when crying or showing despair.

In reality, rape victims react in the immediate aftermath of the event in a variety of ways: some are visibly upset; others are subdued and undemonstrative. There is, unsurprisingly, no universal reaction to being raped. The detectives were relying on their instincts, and their instincts turned out to be constructed from inherited and unreliable notions about women in distress."