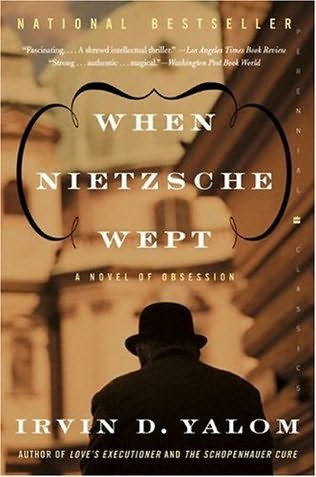 Back-cover description: In nineteenth-century Vienna, a drama of love, fate, and will is played out amid the intellectual ferment that defined the era. Josef Breuer, one of the founding fathers of psychoanalysis, is at the height of his career. Friedrich Nietzsche, Europe's greatest philosopher, is on the brink of suicidal despair, unable to find a cure for the headaches and other ailments that plague him.
When he agrees to treat Nietzsche with his experimental "talking cure," Breuer never expects that he too will find solace in their sessions. Only through facing his own inner demons can the gifted healer begin to help his patient. In When Nietzsche Wept, Irvin Yalom blends fact and fiction, atmosphere and suspense, to unfold an unforgettable story about the redemptive power of friendship.
I am reading this intriguing thought-stimulating novel these days by Irvin Yalom about the fictional encounter between two of the greatest minds of human history -- Breuer and Nietzsche, and I'll be sharing some extracts on this blog as I read along.
* The joy of being observed ran so deep that Breuer believed the real pain of old age, bereavement, outliving one's friends, was the absence of scrutiny -- the horror of living an unobserved life.
* Was he dissimulating? Or was it that he did not now feel despair because he had already decided upon suicide? Breuer had known patients like that before. They were dangerous. They appear improved -- in a sense, are improved; their melancholia lightens; they smile, eat, sleep once more. But their improvement means they have discovered an escape from their despair -- the escape of death.
*"Truth," Nietzsche continued, "is arrived at through disbelief and skepticism, not through a childlike wishing something were so!"
* "It is not the truth that is holy, but the search for one's own truth!" [Nietzsche]
* 'To find everything profound; that is an inconvenient trait. It makes one strain one's eyes all the time, and in the end one finds more than one might have wished.' [Nietzsche]
* "You wonder about a conversation with nothing concealed -- it's real name is hell, I believe." [Nietzsche]
* "And underlying the disorder of rhythm? The cause of causes? Shall we ultimately arrive at God -- the final error in the false search for ultimate truth?" [Nietzsche]
"No, we may arrive at medical mysticism, but not God! Not in this office." [Breuer]
* "The taste of my death in my mouth gave me perspective and courage. It's the courage to be myself that is the important thing." [Nietzsche]
* Breuer was startled at the similarity of Nietzsche's statement to Freud's position the day before. "You suggest that there are independent walled-off mental kingdoms within our mind?" he asked.
"It is impossible to escape that conclusion. In fact, much of our life may be lived by our instincts. Perhaps the conscious mental representations are afterthoughts -- ideas thought after the deed to provide us with the illusion of power and control."
* Nietzsche continued: "You have looked at my books. You understand that my writing succeeds not because I am intelligent or scholarly. No, it's because I have the daring, the willingness, to detach myself from the comfort of the herd and to face strong and evil inclinations. Inquiry and science start with disbelief. Yet disbelief is inherently stressful! Only the strong can tolerate it. Do you know what the real question for a thinker is?" He did not pause for an answer. "The real question is: How much truth can I stand? It is no occupation for those of your patients who wish to eliminate stress, to live the tranquil life."
Books Philosophy When Nietzsche Wept

Butters said…
Nietzsche was beginning to realize some spiritual truths, but he went in the wrong direction and finally cracked up. This happens when you don't do mysticism properly.

Specifically, Nietzsche was a 'prophet of the vital', i.e. he was all about the strength of a person's will and affect, without realizing that this too is sinful and in need of consecration. This mistake cost him his sanity, ultimately.
November 15, 2010 at 10:01 AM