Being Fabulous and Obsessed 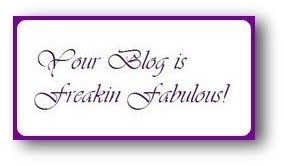 Behind every freakin' fabulous blog is ... guess what ... an obsessed mind!

Salman Latif has kindly awarded me the freakin' fabulous award, tagged with the rules that i have to divulge five of my current obsessions to the world, and then pass on the award to five other fabulous blogs. Okay, here we go.

1) Mafia Wars: Its an online browser game on Facebook which is about establishing and expanding your criminal empire. It is an efficient way to waste time, and it can get pretty addictive.

3) Dollhouse: A sci-fi action tv series which did not get as much popularity as it deserved. Welcome to a world in which the minds of people can be wiped clean and imprinted with a new set of personality, which may be some real copy or may be artificially designed. A corporation named Dollhouse offers these imprinted 'dolls' to the filthy-rich clients, imprinting them with whatever personality is asked for. The series follows a particular Dollhouse establishment and an FBI agent who is trying to uncover it.

5) Deviant Art: A website for art fans to share their work and browse through others'; it also caters to literature and photography. Have been visiting it a lot lately.

There are many fabulous blogs i know of, but most of them wouldn't care for such an award, lolz, so i will try to short list those fabulous blogs whose authors would be likely to continue on this tradition :)

1) Writing for Life by Raaji
2) The View from behind my Specs by Specs
3) Abyss of Human Mind by Qasim Aziz. Our very own Nietzsche of the blogosphere!
4) Bain-marie: The Double Boil by Saad Javed
5) Fish Pool by Mayhem. I know Salman has already given you the award, but well, you'll just have to do it again. The price of being fabulous :P
My Life Tags

Salman Latif said…
Interesting obsessions :D
And considering your philosophical interests, I can see why you like Dollhouse :P
Btw I too have been hooked to Deviant Art for sometime. And it's simply awesome!!
September 11, 2009 at 2:17 PM

Yeah, sorry about that. I haven't been commenting much on all blogs i regularly visit. I have been reading your blog though :) i don't know, most of my comments were beginning to sound irrelevant and redundant to me, so i decided to take a little break ;) hehe.
September 11, 2009 at 3:02 PM

Awais Aftab said…
Yes, everyone, it was my brother Uzair who introduced me to Dollhouse and without whom i would perhaps have remained unaware of it :) So thank you bro for discovering yet another great series.
September 11, 2009 at 3:45 PM

Qasim Aziz said…
Lovely ,that its coming from you.Thank you so much for it.
But Nietzsche would have attacked you with one of his ad hominem arguments for comparing me to him. :)
September 12, 2009 at 5:04 PM

Specs said…
Never seen Doll house... will catch some one of these days. I was wondering what series to view next!

I heart Deviant Art. Its a fabulous place!

Umer Toor said…
"It is an efficient way to waste time, and it can get pretty addictive."